Who says Silence is Golden? 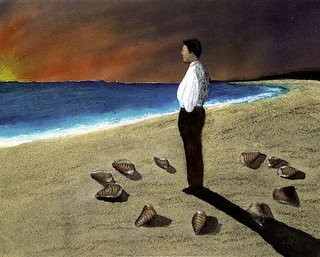 again a piece from my diary...

Here I'm, sitting with Mr. Rahul Kumar Raichowdhury who is currently yap-yap-yapping non-stop in his unmistakbly street-smart indianised version of the queen's english with all the wrong grammar & punctuation-pronounciation that would fill at least 10 episodes of 'the great indian comedy show' & keep your tummy rumbling for days afterwards.
And the best thing is, I've to listen to it with as straight a face as I could keep.
Oh my! What can you do when somebody is hell bent on calling a chemist (that is, kem-ist) with a 'chuck' type ch-emist. And telling you that he knows it is incorrect, that he has been speaking like that since childhood (yeah, chemist as in child) and doesn't intend on correcting this supposed flaw. He in infact is proud of it is another thing altogether...
Okay, time out, I can't do it. I've to laugh and laugh out loud.

I love Rahul. Period. With all his eccentricity & sincere stupidity. He is all that what I'm not. He is positive, cheerful, effervescent, zindadil, khusmizaz, extrovert, makes friends easily and so many other things that i'm not. He is all that & more. He complements & completes me. Through him, I live everything I can't.
Sample this: A 65ml peg of Johnny Walker costs around Rs 200 at Pot Pourri Bar, just above Nirula's pastry shop at Connaught Place. I'm never gonna go there. And that French Onion Soup tastes like shredded-fried onions trashed in plain boiled water. I wouldn't even attempt this. (The only time i like onions is in salad with a generous dose of lemon.) Things like these and so many more.
And how it feels when somebody dies in front of you. Literally.
I'm sorry Rahul. I would have done the same thing, if I was in your position. Watching someone die...I can't.

Accha, I was on the topic of silence. Yeah, who said silence is golden? I mean being silent is a pretty unimaginative thing to do. If you are not silent you can do a lot of things, like putting both your feet in the mouth, like appearing to be not so bright afterall, I mean, ummm, u got the point. Haven't you?

I've been silent for about 10 days. And haven't liked it much. As much as i used to. The last time I blogged, I was all starry-eyed, going to join a far bigger ad agency Uk and the tension and apprehension such a move brings with it.

Well, nothing of that sort happenned. I went there for a day, that is the 1st and came back to De' Hub 2nd onwards. A lot of factors went into this decision and I'm satisfied that I took all the pros n cons into consideration and decided what was best for me. Although sometimes in the past 10 days, there had been that sneaking feeling, which made me wonder, 'what I did'. What was I thinking then?

What took me 10 days to be back? I don't know. Except that I didn't enjoyed this period. Of silence, of introspection & circumspection, but still nothing much. Now that I'm back on track, i would try to be a regular with blogging, 'cause I'm loving it...
by delhidreams at 11:39

hey!
"silence is golden"
i guess thats wat all my friends think when they talk abt me....i mean silence is not only golden for them (when applied to me its platinum, diamond and much more....
but still i dont think i can ever glow in that golden light

Two years ago, my school participated in its first Day of Silence. Students were harassed for participating. Teachers got mad. The next year, many students did not understand the purpose, but some unlikely people began to participate and the GSA began to hear less in the way of homophobic slurs. This year, we offered stickers for those who wanted to participate but could not take a vow of silence. Many people I did not know came up to me asking for stickers and the student body was generally very excited. All of my teachers gave little speeches at the beginning or end of class about what the Day of Silence is important and told us about the queer people in their lives. Everyone really seems to get it now.