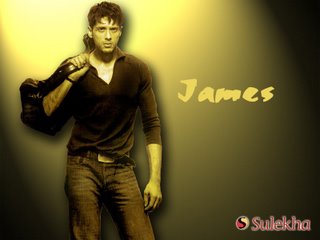 My horoscope for today.

'Dreams & wishes about love are strong now and you may be infatuated towards someone you meet at this time, but disappointed later when you discover this person doesn't fulfill your expectations. See things objectively.'

As for me, I believe in these but not in the mass application of a certain day or date of birth to every individual on the planet.


Saw 'James' last night. (It is a movie produced under the Ram Gopal Verma banner, featuring Randeep Hooda). Really-really-really liked it. In this age of overtly mushy-gushy, streaky-weepy, hoogla-doo romances, where even Akshay Kumar is content with wiping his nose & tears on his girlfriend's sleeves- this was a real good ole' action movie. Much like the 'Van Damme' movies from my growing-up years.

'Bloody' well I liked it.

Just one query. Is power the all in all? And what kind of power is most powerful? Brain, brawn or belief in God?
"Jindagi jeene ka naam hai jee le"... life is meant to be lived- live it!

Way to go James.
It becomes difficult for me to be objective sometimes. Actually mostly.

WE have the satellite rights to James, have been trying to telecast it for the last 2 months, but have been unable to get it recensored from it's current 'A' status to U/A or U. The Censor Board feels it is too violent!

what's wrong with that?
they will permit to air it only with certain cuts, which as a viewer i won't like very much...
james is to be viewed in completion, even the villian's lip antics... they were more violent than the actual violence

so a lot has been written while i was gone....i wont comment much ...just horoscopes generally dont work for me ....and funnily the good parts never ....and the bad ones some times..worst ones always come true...heeehee...most of the times they are early or late....so horoscopes cant work for me...dont watch many movies....and well objectivity.....alien alien